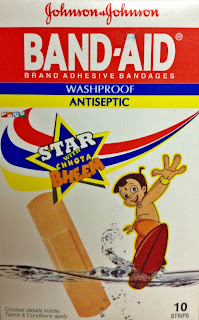 Recently, I got chance to try adhesive bandages of both Johnson & Johnson Band-Aid WashProof (antiseptic) and Hansaplast WashProof and after using more than 10 bandages of each, I am ready with my experience. Few days back, I got injured at the bottom of my foot and at this place only a bandage with strong adhesive can work.

After finishing Hansaplast bandages, I got chance to try Johnson & Johnson’s BAND-AID Wash Proof (Antispectic). I bought two boxes of Band-aid with 10 pcs each. Johnson and Johnson claims that new Band-aid has improved antiseptic and better adhesive qualities. I do agree with first claim that antiseptic is better and works fine; however, I do not agree with second claim that adhesive is better. At a place like bottom of foot, Band-Aid adhesive was not a good fit and sometimes, I was required to use two or three band-aid bandages in a single day. When we compare Hansaplast and Band-aid bandages for adhesive strength then Hansaplast is much better and clear winner; however, antiseptic used in new Band-aid looks slightly better than Hansplast as I did not observed whitening of skin after using Band-Aid.

About Price- Hansplast bandage is 20% economical than Band-aid bandage.

Popular posts from this blog 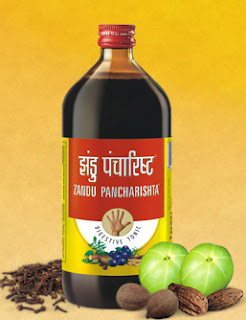 Stomach related Problems are very common in India and every second person in India faces some kind of stomach problems or disorders. I also come under the second category of people who have a weak digestive system. From childhood, I have been constantly suffering from various stomach related disorders from time to time. My liver is also weak; therefore, from time to time I face many stomach infections. During these years, I tried many digestive tonics, syrups and tablets. However, all products failed to provide complete relief.

Two years back, I also started facing acute acidity problems. This problem was so acute that acid used to fill in my mouth at night and thus stopping air supply to my brain. Therefore, I decided to look for a good solution so that I can get rid of this problem. First, I stopped eating fried items and foods full of spices. I started taking regularly Amla juice and Aloe Vera syrup. Both these combinations helped me in controlling my problem to some extent.

Hamdard is an age-old Unani medicine manufacturer from India, and their products are very famous because of their effectiveness in treating various health problem. Today, I am going to share my experience with Hamdard’s Joshina. My intimacy to Joshina, a preventive medicine for common cold, started eight years back when my father advice me to take Joshina when I observed symptoms of a cold.

Following advice of my father, I took two tablespoons of Joshina with hot water, and to my surprise, I felt quite well even after a single dose. At that time, I first realized that Joshina is a great medicine to prevent common cold. So , whenever I feel like getting cold, or see initial symptoms of common cold, I immediately take Hamdard’s Joshina. It may not be a 100% solution for the common cold; however, it's very-very effective in treating initial stage of common cold.

Now, it is common to find one bottle of Joshina at our home, and every member of the family takes it whenever he feels li…
Read more

My Review - Amway Glister toothpaste (Not so good as claimed) 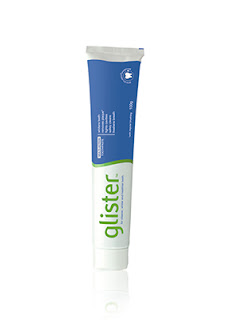 An aunty in our neighborhood was trying to introduce a few people to our family who she claimed are part of a big business. After many times saying no to her, she one day landed at our home without an appointment. As a good host, we decided to give some time to these three men who were well dressed.

Within a few minutes, we come to know that they are from Amway and they are here to sell the Amway products to us. They introduced many of their products to us and made many big claims about them. One of such products was Glister toothpaste which they claimed is 100% natural and don't have any chemicals in it unlike the other toothpastes in the market.

As we are not much interested in them so we bought two products from them, one was Glister toothpaste and other was Calcium tablets (which we returned later). Due to these gentlemen, I came to know about the Glister toothpaste for the first time.

First, we were surprised to see the high price of this to…
Read more