My Review- Sunfeast's Yumfills Whoopie Pie (Not up to Mark) 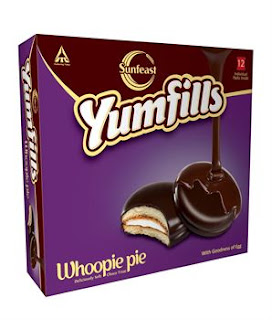 Last week when I took my three and half year old son to the Super store, then it resulted in the sale of Sunfeast's Yumfills Whoopie Pie. We bought this product for the first time, whereas we have bought Lotte Chocco Pie many times. My son didn't like these Pies much so I finished them off.

After eating around 5 Yumfills, I am going to share my review with you. Sunfeast is a brand of ITC (a big name in Indian eatable items). I will compare this product with Lotte Chocco Pie and also give my own opinion.

As a product, I didn't like it much because of excess bitterness of cocoa, which is not present in Lotte Chocco Pie. Its taste remains in your mouth for a long time. If I compare it to Lotte Choco Pie then Lotte Choco Pie looks to have a bigger edge on the Sunfeast Yumfills Whoopie Pies.